Why a blog series

Actually this post wasn't planned to be a series but as usual the posts are getting longer and longer. The more I write, the more came in mind to write about. Bloggers now this, I guess. So I needed to decide, whether I want to write a monster blog post or a series of smaller posts. Maybe the later is easier to read and to write.

What is Orchard Core?

I don't want to repeat the stuff, that is already on the website. To learn more about it just visit it: https://www.orchardcore.net/

I had a look into the Orchard CMS, back then when I was evaluating a new blog. It was good, but I didn't really feel confident.

Currently the RC2 is out since a couple of days and version 1 should be released in September 2020. The roadmap already defines features for future releases.

Let's have a first glimpse

When I try a CMS or something like this, I try to follow the quick start guide. I want to start the application up to have a first look and feel. As a .NET Core fan-boy I decided to use the .NET CLI to run the application. But first I have to clone the repository, to have a more detailed look later on and to run the sample application:

This clones the current RC2 into a local repository.

Than we need to cd into the repository and into the web sample:

Since this should be a ASP.NET Core application, it should be possible to run the dotnet run command:

I'm now should be able to call the CMS in the browser. Et voilà: 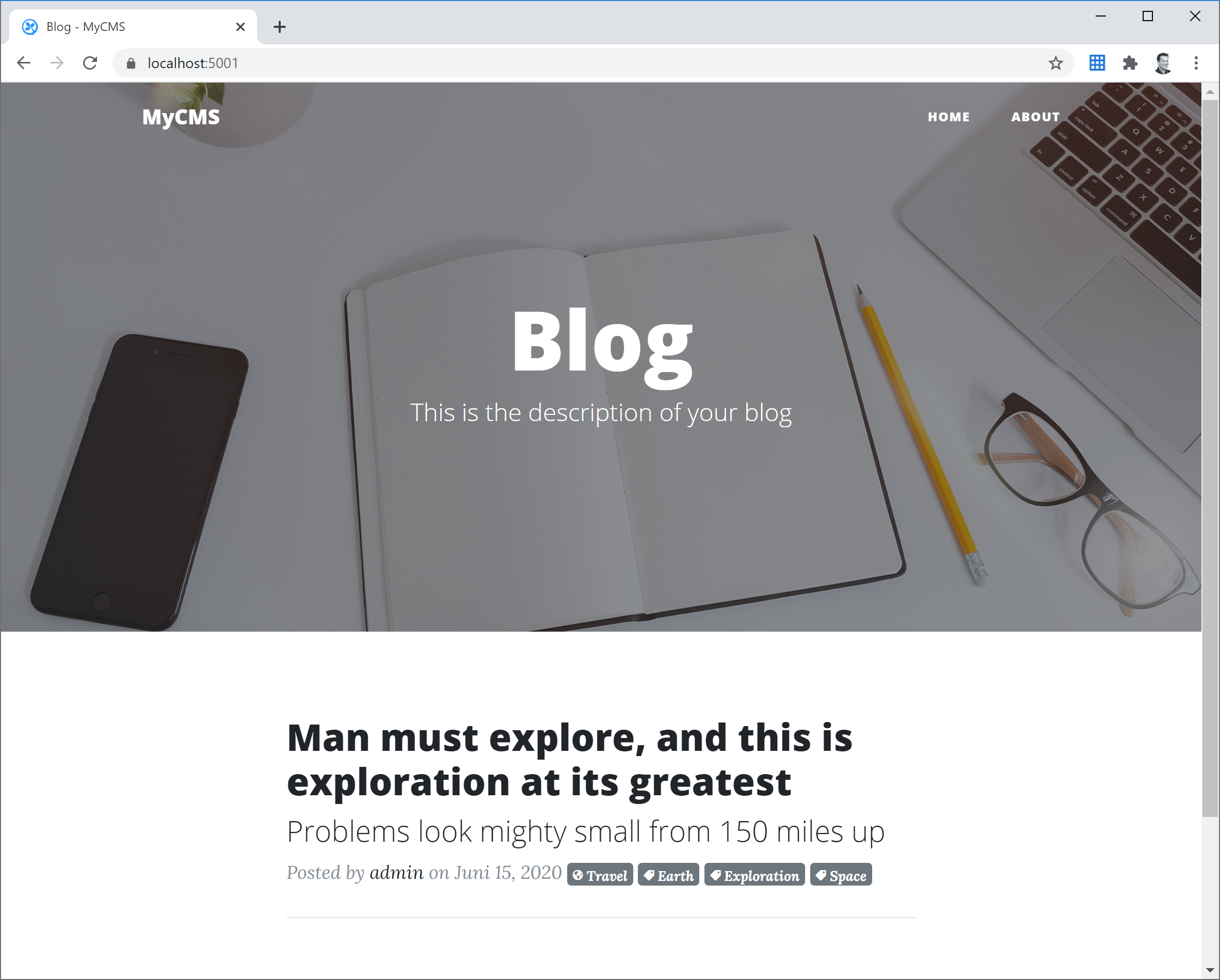 Since every CMS has an admin area, I tried /admin for sure.

At the first start it asks you about to set initial credentials and stuff like this. I already did this before. At every other start I just see the log-in screen: 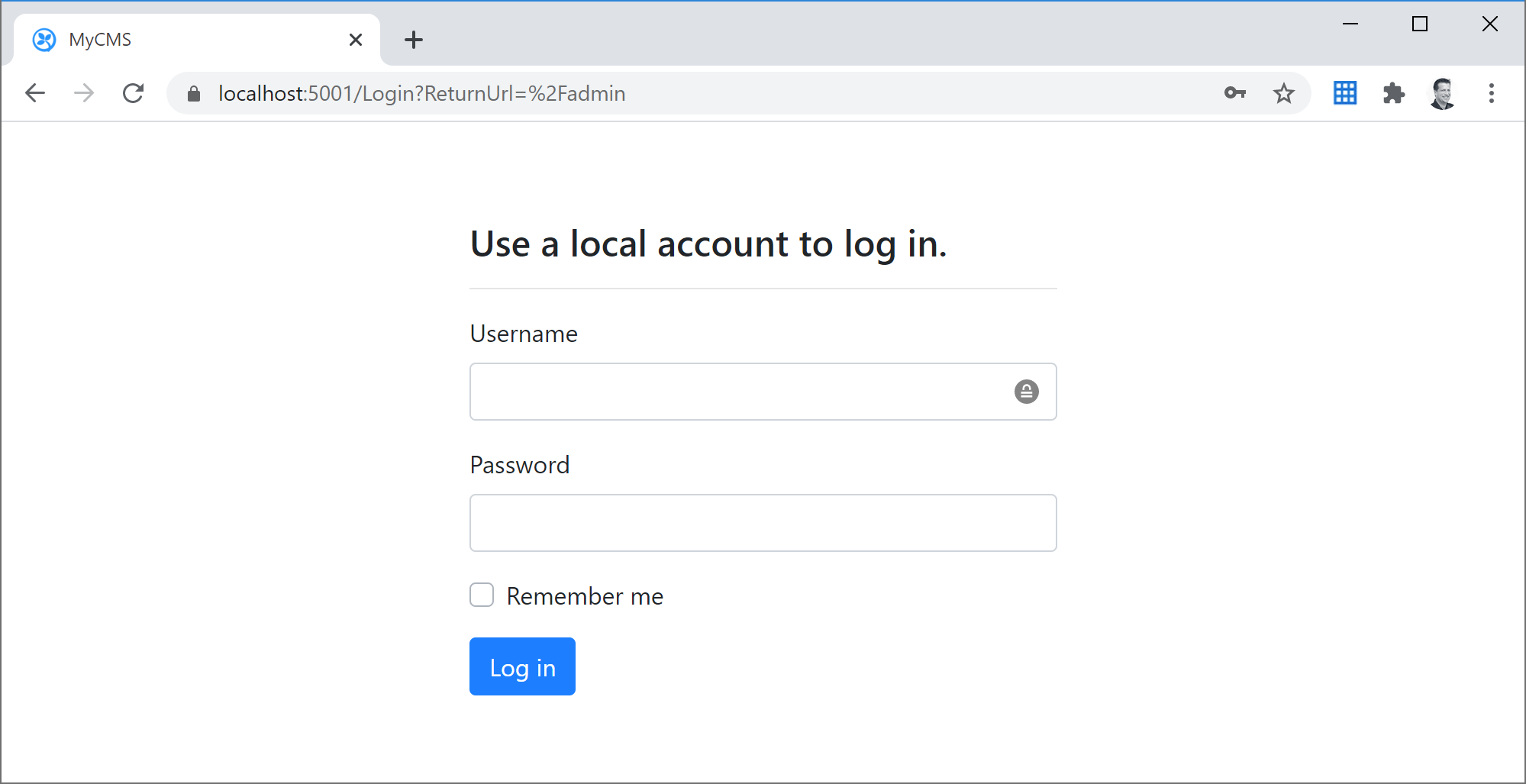 After the log-in I feel myself warmly welcomed... kinda :-D 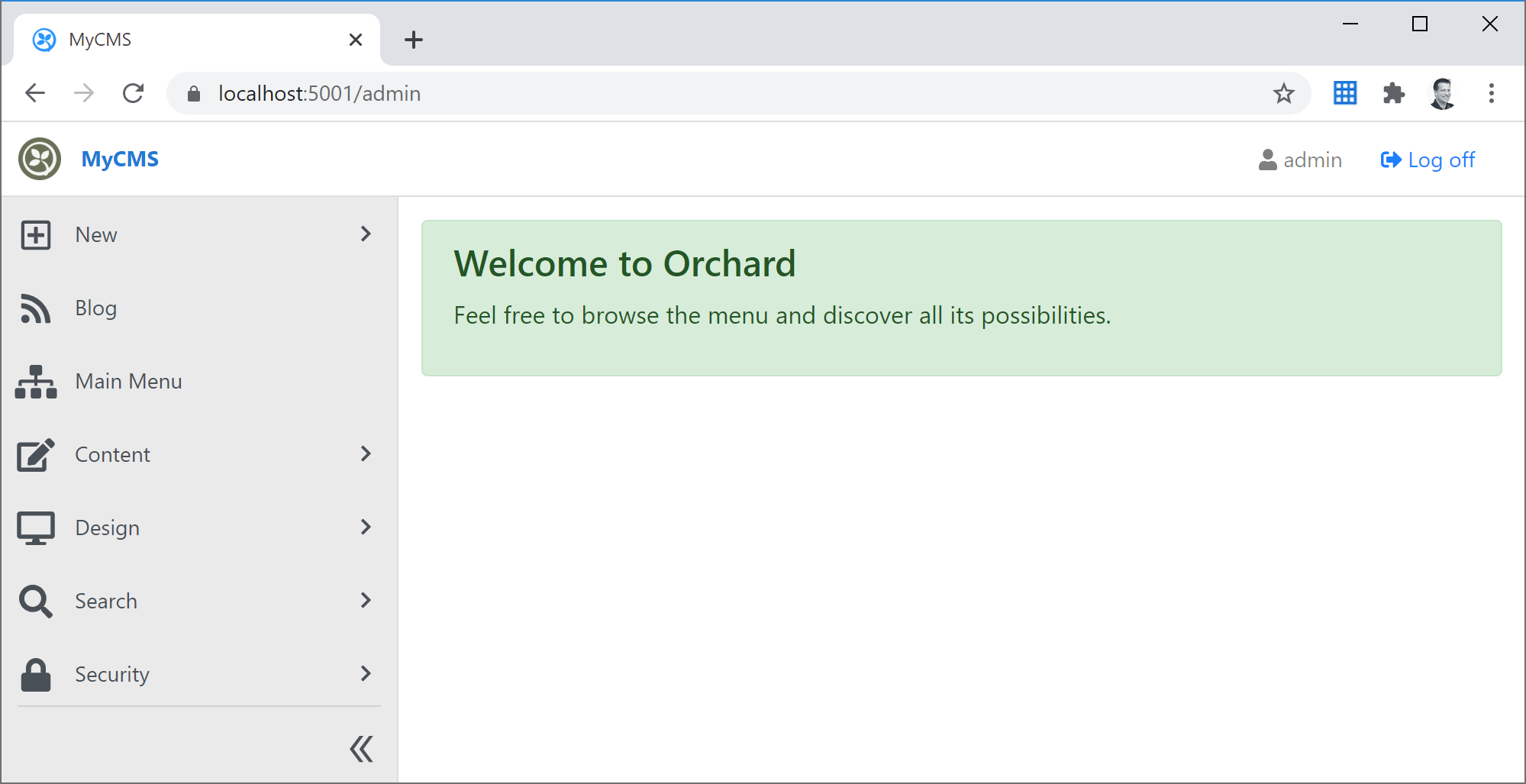 Actually this screenshot is a little small, because it hides the administration menu which is the last item in menu. You should definitely have a look into the /admin/features page that has a ton of features to enable. Stuff like GraphQL API, Lucene search indexing, Markdown editing, templating, authentication providers and a lot more.

But I won't go threw all the menu items. You can just have a look by yourself. I actually want to explore the application framework.

I want to see some code

This is why I stopped the application and open it in VS Code and this is where the fascinating stuff is. 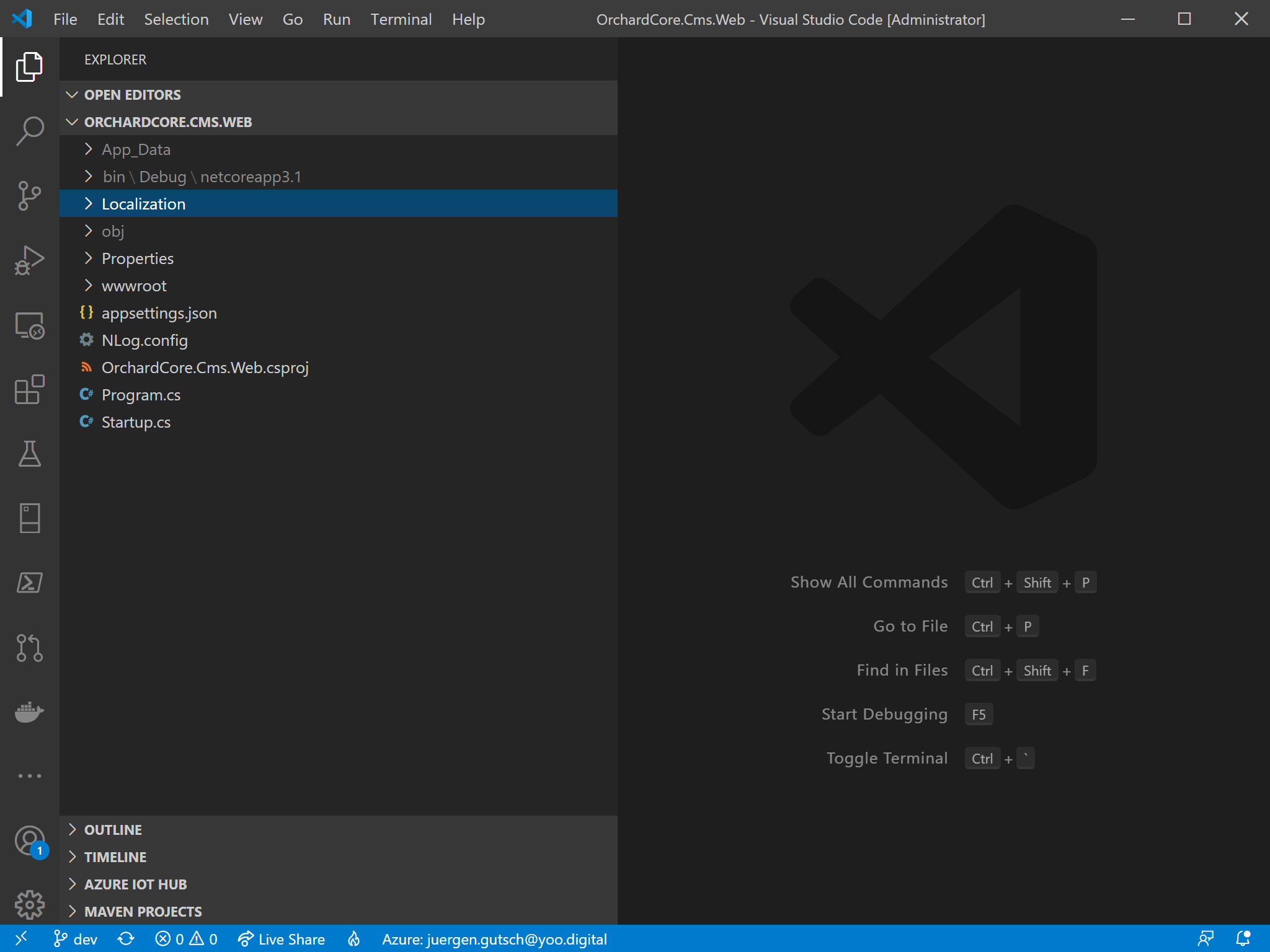 Ok. This is where I thought the fascinating stuff is. There is almost nothing. There are a ton of language files, an almost empty wwwroot folder, some configuration files and the common files like a *.csproj, the startup.cs and the program.cs. Except the localization part, it completely looks like an empty ASP.NET Core project.

Where is all the Orchard stuff? I expected a lot more to see.

The Program.cs looks pretty common, except the usage of NLog which is provided via OrchardCore.Logging package:

This clears the default logging providers and adds the NLog web logger. It also uses the common Startup class which is really clean and doesn't need a lot of configuration .

Actually this Startup configures the Orchard Core as CMS. It seems I would also be able to add the Orchard Core to the ServiceCollection by using AddOrchardCore(). I guess this would just add Core functionality to the application. Let's see if I'm right. 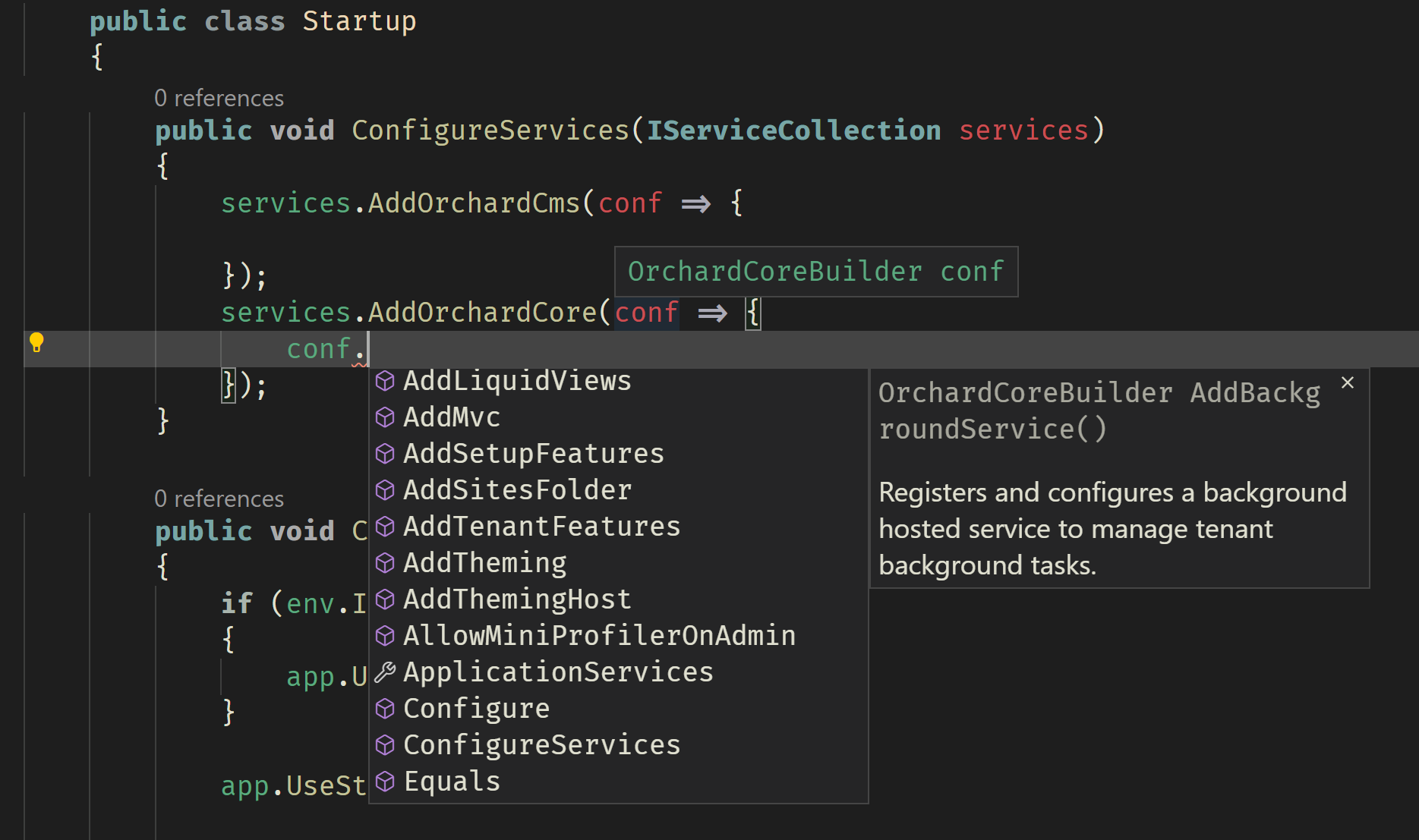 It is a lot of guessing and trying right now. But I didn't read any documentation until now. I just want to play around.

I also wanted to see what is possible with the UseOrchardCore() method, but this one just has on optional parameter to add an action the retrieves the IApplicationBuilder . I'm not sure why this action is really needed. I mean I would be able to configure ASP.NET Core features inside this action. I could also nest a lot of UseOrchardCore() calls. But why?

I will write about this in the next part this series.

Not a conclusion yet

I will continue exploring the Orchard Core Framework within the next days and continue to write about it in parallel. The stuff I saw until now is really promising and I like the fact that it simply works without a lot of configuration. Exploring the new CMS would be another topic and really interesting as well. Maybe I will find some time in the future.