For a while, I'm trying to get into the topics of application security. Application security is a really huge area and covers a lot of topics. It contains user authentication as well as CORS, various kinds of injections, and many other errors you can do during development. One of the huge topics is about possible vulnerabilities in dependencies.

Almost every developer is using third-party libraries and components directly, via NuGet, NPM, pip, or whatever package manager. I did and still do as well.

NPM already has a dependency audit tool integrated. npm --audit checks the packages.config against a vulnerabilities database and tells you about flaws and which version should be safe. In Python, you can install pip package globally to do vulnerabilities checks based on the requirements.txt against an open-source database.

In the .NET CLI you can use dotnet list package --vulnerable to check package dependencies of your project. The .NET CLI is using the GitHub Advisory Database to check for vulnerabilities: https://github.com/advisories

The GitHub Advisory Database contains "the latest security vulnerabilities from the world of open-source software" as GitHub writes here https://github.com/advisories.

It is great to have the possibility to check the packages for vulnerabilities but it doesn't make sense to check against a database that only contains 140 entries for that amount of packages.

2nd) It is not common the the .NET universe to report vulnerabilities

Compared to the other stacks the .NET universe is pretty new in the open-source world. Sure, are some pretty cool projects that are almost 20 years old, but those projects are only exceptions.

3rd) There are less vulnerabilities in .NET packages

Since the .NET packages are based on a good and almost complete framework there might be fewer vulnerabilities than on other stacks. From my perspective, this might be possible, but it is petty much dependent on the kind of package. The more the package is related to a frontend, the more vulnerabilities can occur in such a library.

Why should I use such a advisory database?

Don't completely trust your own code

You as a package author are not really save with your own code. Vulnerabilities can occur in every code. Every good developer is focusing on business logic and doesn't really think about side aspects like application security. It can always happen that you create a critical bug that results in more or less critical vulnerability.

It is not your fault to produce packages with vulnerabilities accidentally, but it would be your fault if you don't do anything about it.

Don't completely trust the NuGet packages you use

Even Microsoft packages contain vulnerabilities as you can see here: https://github.com/advisories/GHSA-q7cg-43mg-qp69

GitHub does such checks on the code level for you using the Dependabot. In case you don't host your code on GitHub you should use different tools like the already mentioned CLI tools or commercial tools like SonaSource, Snyk, or similar.

How to report a vulnerability 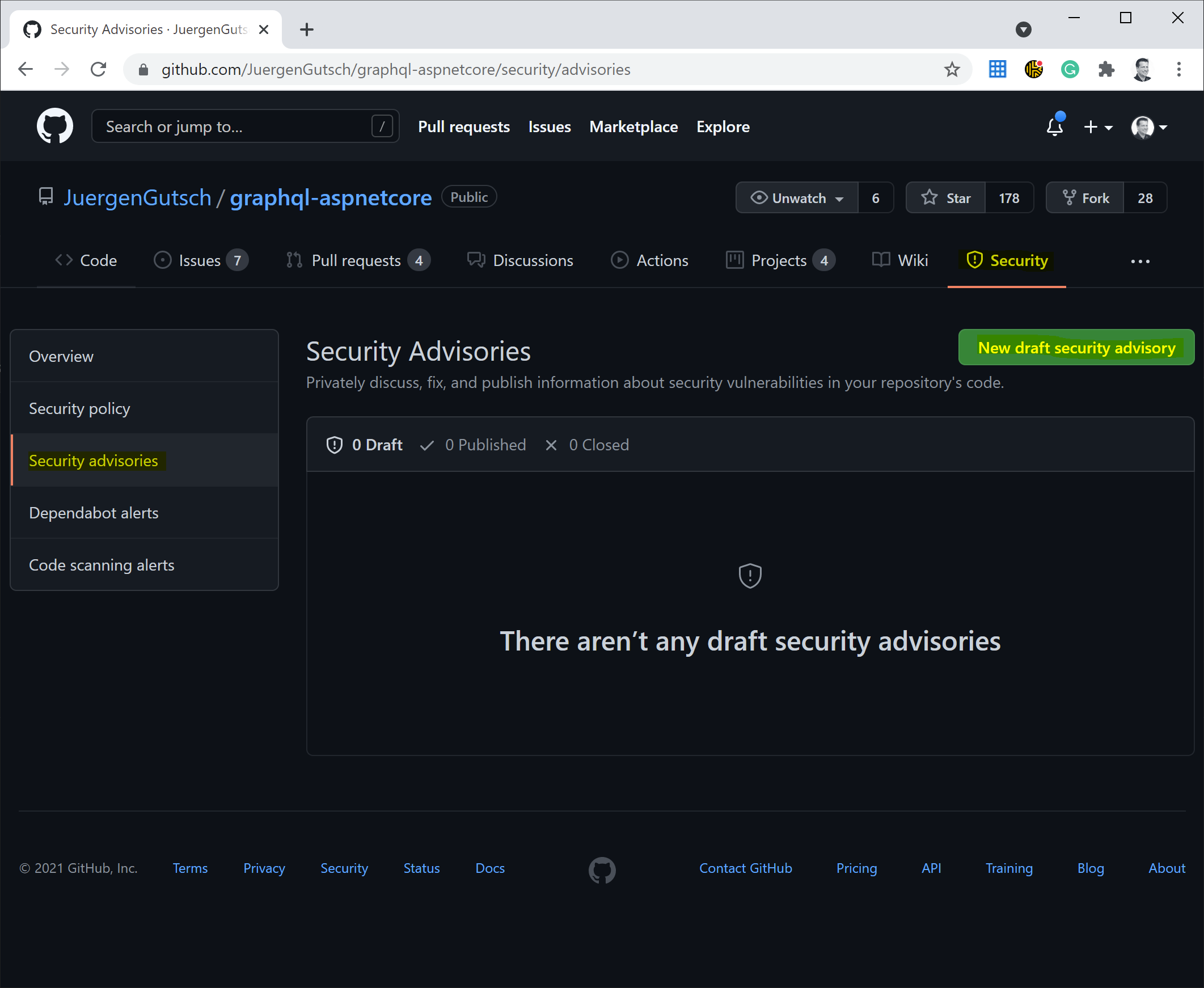 If you don't own that repository, you will see the same page but without the button to draft an advisory.

If you click that button, you'll see a nice form to draft the advisory. 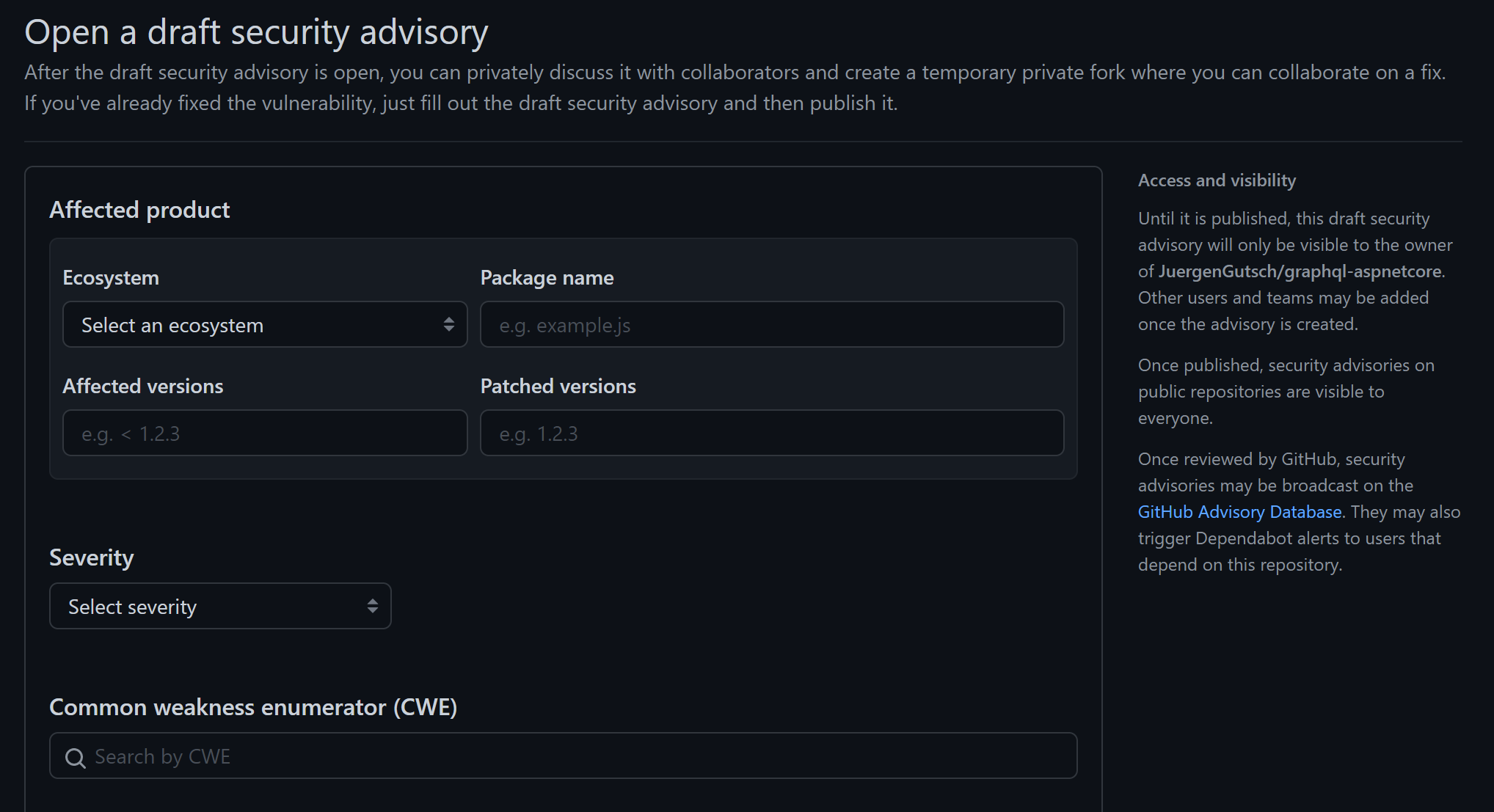 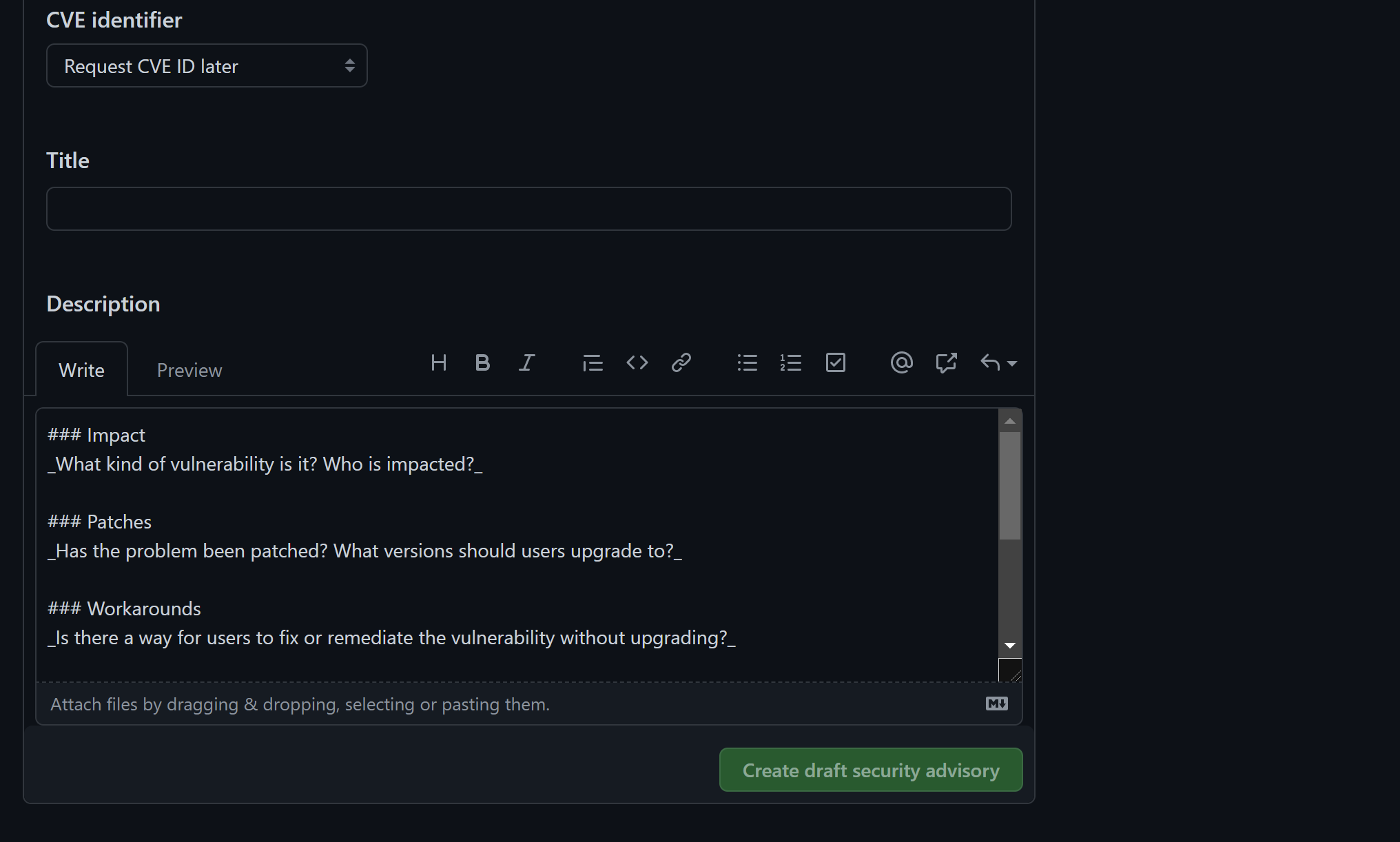 Once it is drafted, you can request a CVE identifier or just publish it. The GitHub team will then review it and add it to the advisory database: 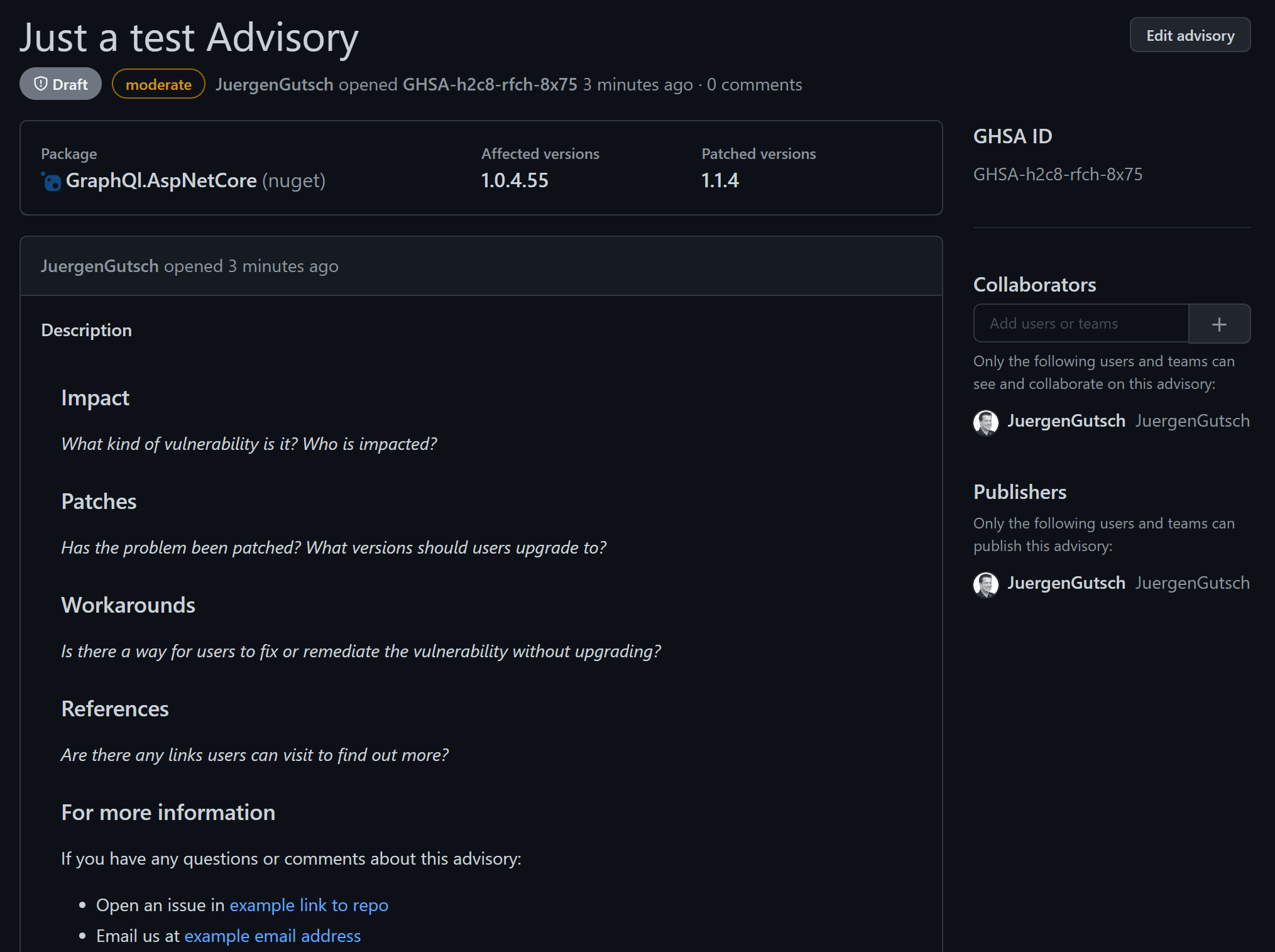 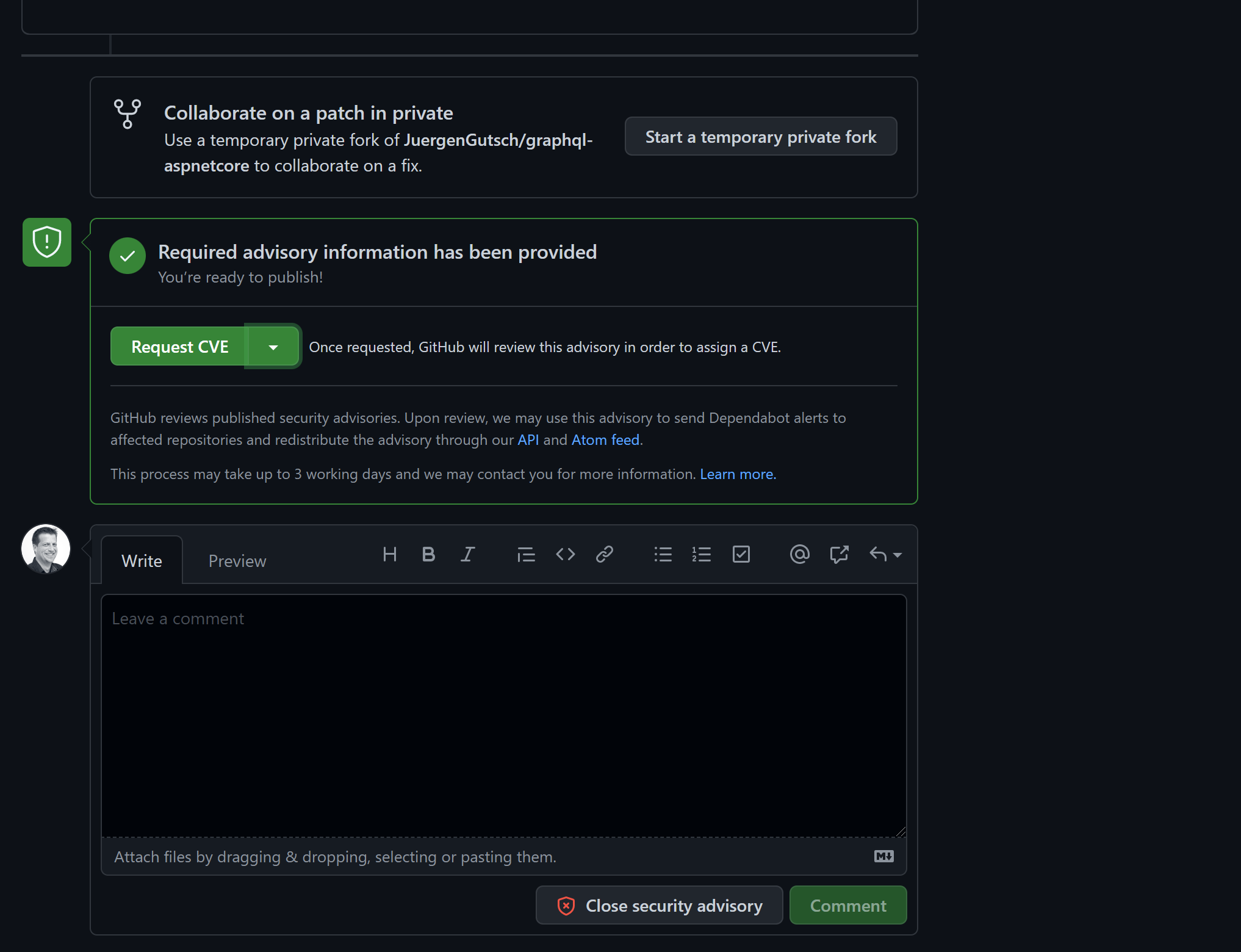 If you find a critical problem on a repository that you don't own. You should create an issue on that repository, describe what you found. The repository owner should now fix the problem and add an advisory to the database.

This would help to keep the applications secure.